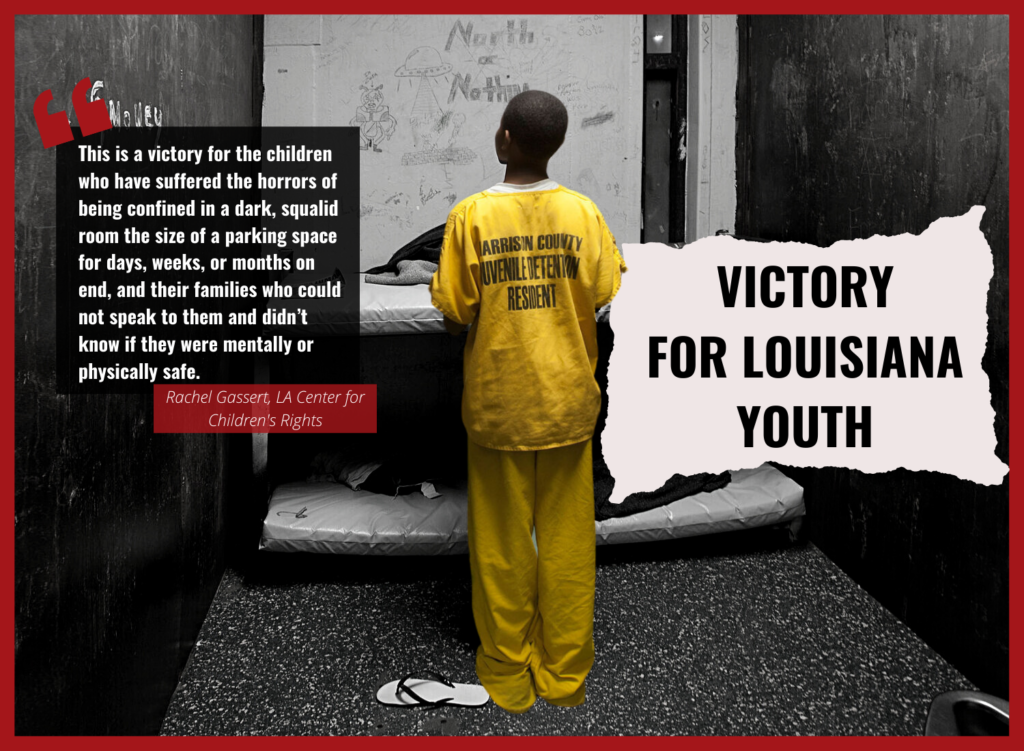 BATON ROUGE, LA – Today, Louisiana Governor John Bel Edwards signed House Bill 746 into law as Act 496, eliminating the use of youth solitary confinement beyond a 24-hour period. This monumental legislation follows an investigation into state juvenile facilities that revealed routine and often illegal use of solitary confinement by corrections staff to manage normal behavioral issues, drug abuse, and mental health disorders. Act 496, which passed through the state legislature with overwhelming support, offers a rebuke to these practices as inhumane and intolerable.

Louisiana incarcerates 350 children annually, more than 80 percent of whom are Black. Between 2019 and 2020, solitary confinement was used some 751 times in state facilities to discipline and punish incarcerated youth. Advocates and health professionals have long implored the state to end the use of solitary confinement among children as it has shown to lead to increased depression, anxiety, psychosis, and even suicide – sometimes occuring years after a child is released.

The law will not only limit the period for which a child can be held in solitary confinement to 24 hours, it also mandates that solitary only be used in cases where there is an extreme threat to life, not including suicide. Additionally, it implements de-escalation policies and mental health evaluations during the solitary period. Specifically, it orders staff to engage in de-escalation with the child every ten minutes and provide a mental health evaluation after 8 and 16 hours, respectively, to ensure the child is released as soon as possible. It also requires the facility to alert the parents and the child’s attorney within two hours of confinement.

Advocates applaud the work done in the state legislature to ensure the bill was enacted. In celebrating the Governor’s signature of Act 496/HB746, Rachel Gassert, the Policy Director at the Louisiana Center for Children’s Rights said, “Solitary confinement doesn’t improve safety in juvenile prisons, and it is deeply traumatizing to the children who experience it. Now, with the passage of HB 746, it must only be used as truly a last resort. This is a victory for the children who have suffered the horrors of being confined in a dark, squalid room the size of a parking space for days, weeks, or months on end, and their families who could not speak to them and didn’t know if they were mentally or physically safe.”

Other watershed provisions include that youth placed in solitary confinement must have access to sunlight, sanitary conditions, educational materials, and legal aid. Finally, the law requires detailed data collection on the use of youth solitary, including but not limited to information on demographics, rationale for use, and length of stay. All data must be available for public records requests thus providing much needed access for watchdog advocacy organizations.

The bill was sponsored by Representative Royce Duplessis (D-New Orleans) and supported by activists working in conjunction with youth survivors of solitary. Vanessa Spinazola, Executive Director of Justice and Accountability Center of Louisiana stated, “There are alternatives to the outdated practice of extended isolation that still keeps carceral facilities safe for everyone that lives and works there, without causing lasting harm to people and their families. The Louisiana Stop Solitary Coalition congratulates members of the Louisiana Center for Children’s Rights and Roots of Renewal in their hard-won advocacy to end long-term isolation for kids, and will continue our work to ensure no human being in Louisiana is subjected to this unnecessary form of suffering.”

A ceremonial signing has been scheduled with advocates for June 30th.

PrevPreviousReps. Trone and Bice Introduce the Solitary Confinement Study and Reform Act of 2022